In my recent article comparing the color response of the Canon 5D Mark lll in Lightroom 4.1 with and without SpyderCheckr calibration received a lot of interesting responses. The most frequent questions were: what profile did you use (answer: Adobe Standard, for reasons that will become apparent below), and what effect would changing that profile have on the color? That seemed like a valid line of enquiry. I also thought it appropriate to also show what would happen if I build a calibration on top of each of these profiles, and applied these calibrations for comparison. The usual caveats about what you see on your (possibly uncalibrated) monitor through your (possibly non-color managed) browser apply.

First its necessary to understand the importance of defaults in such settings as Tone Curves and Profiles. Images are imported into Lightroom, and unless  you build a special Preset, and specifically include things like a Tone Curve and a Profile into that preset, and remember to import all images through that Preset, then you (like 99% of Lightroom users) will end up processing your images on top of the default settings. So my standard recommendation is to leave the Tone Curve and the Profile at the default, and to build your custom SpyderCheckr camera calibration (and your SpyderCube white balance and exposure adjustments) on top of those settings. That way you won’t have to remember what settings were in place when you created the calibration, and the chance of you having the wrong settings in place when you apply the calibration are minimized.

Also note that pushing the Reset button in Lightroom’s Develop Mode will reset the Tone Curve in Process2012 to Linear, and the Profile to Adobe Standard, even though you might not have intended either of those actions. One more reason its safest to build on top of the defaults, to ensure consistency, and minimize errors.

I then opened the same 5D Mark lll test image I used in my previous articles in Lightroom 4.1, at its default Profile setting of Adobe Standard, and captured what the color from that looked like. I then applied the Lightroom Preset I had build for the Mark lll at Adobe Standard, and captured that as well. These two images were combined side by side into an Uncalibrated/Calibrated image. That image is below. Click on it to see the results at 100%. 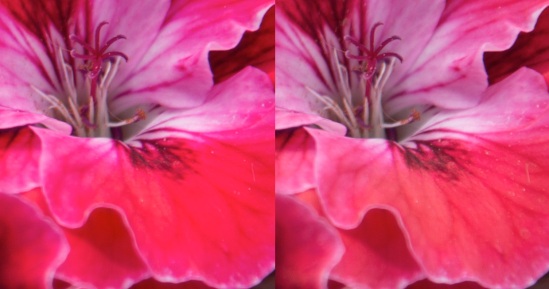 These results, though I created a new calibration, and newly applied it to the image, are similar to the results in the previous article, as the same configurations are used. Next I repeated the same test, with Lightrooom 4.1 now set to the Camera Standard Profile. The results for this pair of images are below.

These results are quite similar to the first pair. Camera Standard is not quite as oversaturated to Adobe Standard, showing a bit better color detail since it is not as bleary, and with a somewhat different hue. Calibration, starting from these two different hues and levels of oversaturation, is satisfyingly similar. This is what calibration is supposed to do. Calibration takes two inaccurate and dissimilar monitors, and makes them both correct and similar by calibrating them. Camera calibration similarly corrects both versions of the image, and as a result makes them a closer match as well. This is very reassuring.

Now to test with a “flavored” Profile. One intended for Portraits is shown below.

Here the  reds are less oversaturated then either of the previous cases, but the near whites show much pinker and more saturated. Note that the calibrated result on the right adds a bit more color detail in the reds, and reduces the over saturation and excess density in the near whites considerably. As a calibration can’t fix everything, there are compromises required. The worse starting point of this Profile resulted in less accurate reds than the other calibrations, in the process of curing the heavily over saturated and too-dark near white zone. This result would indicate to me that one of the other Profiles would be a better starting point for calibration, much as it is possible to choose a better media setting in a printer driver before profiling the printer.

It makes sense that avoiding intentional flavorings and non-linear Profiles in advance of creating a Camera Calibration is a good idea. The fact that the default (Adobe Standard) Profile offers good results in convenient, as it allows users to feel comfortable doing what is easiest: calibrating on top of the default, for the least chance of later errors in applying the calibration to future images as they are imported.